Ever since chess olimpiad started, I have been keeping myself struggling to be awake just to watch the match live on the net.. Lately I got to work 30 minutes late! But that never stops me to keep writing about chess! Hey, I am after all crazy about chess..

Ok, about the news. In Round 4, Malaysia men manage to won all 4 games against uganda, And surprisingly Malaysian women won 2.5-0.5! Siti Won, Syazwani drew and Roslina won. What a performance! Impressive.

But let me get you the report on round 3 :

Round 3 was played on Thuesday 23 May at 03.00 p.m. Russia (Kramnik, Morozevich, Bareev, Rublevsky) defeated Germany (Naiditsch, Yusupov, Lutz, Graf) with 2,5-1,5. Fight of the Day was Kramnik-Naiditsch. It was Kramnik’s first game in in the chess arena after an absence of about half a year. Kramnik won. In the Men’s section Russia, China and Uzbekistan lead with 10,5 points, followd by Ukraine, Netherlands and Greece with 10 points. A group of 6 countries is on 9,5 points.

In the Women’s section Lithuania (Cmilyte, Ciuksyte, Daulyte, Batyte) leads with the maximum score 9 points, followed by Russia and China who dropped half a point.

To all chess fans out there,
If you are waiting for Good news today for Malaysia Team, then, sorry guys...

and I watched the games live through Internet

More news, up next!! 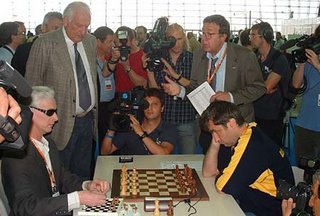 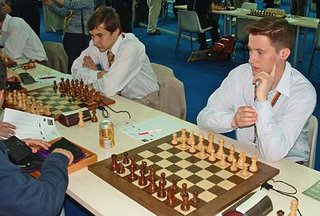 Hi all Chess Fans out there..

So, if you guys out there, want to play chess with me, meet me this saturday, at KWSP kuantan!

I will keep you guys update with the latest news on Malaysian team at chess Olimpiad in Turin.

First round, both men and women team lost their game. Men lost 4-0 to spain, Women lost 3-0 to China, games and latest result will update later.