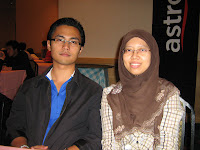 And yes.. IM Mas is still pursuing his dreams of becoming Malaysia's first GM. He has been to many tournaments ever since he turned pro last october. His leave of absent from work will expire April 2009. The last time I saw him was at Royal Selangor Open in May, where he dropped by to see what's going on. Then the latest was at Merdeka Rapid and DATMO. Well, he looked different (lost few kilos!). More serious than ever, but still he is smiling all the way at whatever circumstances he is in right now. He is not in good condition, and has been playing straight too, it does gives him the stress to realise our one dream! I juz wish him well and play well.

Pic left : Mas, Cathy and Ian
Pic right : the table that Mas was playing
I went to Cititel Express KL to get a glimpse at the happening there, but when I arrived there with Haslindah, Mas was having a discussion with his trainer GM Ian Rogers and wife Cathy Rogers. He won round 5 against FM Myo. He doesnt sound like he is happy with his result so far, juz like I said earlier he is under a lot of stress, and he is playing under that circumstances..

The tourney was held juz for Mas to get the norm, well, he almost done it at Biel... There are 3 GMs playing (Sermek - from Croatia, Illudhachev from Uzbek and Ziaur Rahman from Bangladesh), 1 WIM Zhang Xiaowen from China, 1 FM Myo from Myanmar and 1 IM Mas.

Mas needed 6.5 points from 10 games (double round robin format). But so far after 7 rounds he is at 3 points standing. Which makes the norm seems far to reach for. But I do hope he will increase his ratings. Increase in ratings does gives impact to him when he get his norms.
Hopefully, he'll get his leave from chess for few days and get his focus back on track! (he need that)
~for more info click link hairulov~
Posted by NWM 019-9699879 at 2:03 PM No comments:

The outside of the tournament hall..
Pic on the right : the juniors section

The Open section..
Pic on right : Pelikan team in the pic - Kamaludin yusof vs Astro team - Siti Zulaika (this was Siti's second tourney in the year after Merdeka Rapid, due to her studies)

The ladies in action too. Pic above is Roslina and Nurshazwani. Roslina's playing for ex-MMU and Shazwani for Selangor's (her team won best state and second runner up after Apocalypse Manila.

Mohd Irman playing for his company (I think), Pic on the right : is Hairulov.. I saw him at the playing hall and take photos of him, then I am off to Cititel Express to see the GM event there. To my surprise he was there too... A very active paparazzi indeed, off to Cititel express like a bullet after his game! 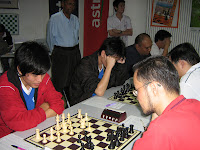 The last series of Malaysian Chess Festival 2008 is Merdeka Standard that was held at Kompleks Wilayah Kuala Lumpur on the 30th and 31st August 2008. This is the second I am not playing, but however I am in KL for the paparazzi news, esp to all the fans!
Though 1st sept is the first Ramadhan (fasting month for all muslims), the turn out for Merdeka Standard was overwhelm like last year.. Thanks to the organiser that eventually reduce the rounds and concluded the game in two days instead of three to give way to outsiders to have their ramadhan at home!
I was surprise to see the one and only Phillippines team stayed in Malaysia a bit longer for Merdeka Standard after the DATMO. The team - Apocalypse Manila who was fifth in Merdeka Rapid, obviously wants to the crown on this one! They only suffered a terrible loss to Pelikan team in round 4, but came out the best they could to close the gap from tournament leader - Selangor. Before the last round Selangor was leading with one point.
Both team met in the last round, Selangor only need a narrow win to walk away with the title, but fate decide that Filipinos won the game with 2.5 to 1.5. Though the total score was the same between both teams, but the champion belongs to Apocalypse Manila after all.
Anyway congrats to all Teams participating.. This is the last event that will be held in Kompleks Wilayah. After this, MCF will have a new office at OCM, so, the tourney hall will be in the OCM building too. Hope it will be better looking and with better facilities to all players.
For more info log on to www. gilachess.com
Posted by NWM 019-9699879 at 10:42 AM No comments:

The Malaysian Chess Festival 2008, has ended! The event that I experience myself this year. I managed to get few photos. 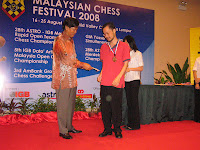 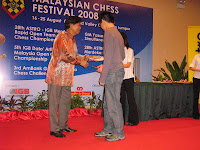 Malaysian best this year! FM Mok and FM Lim (note : IM Mas was present at the closing ceremony but my camera ran out of battery power to take his photo) 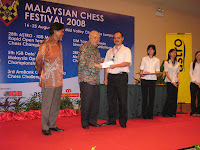 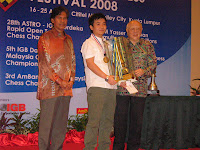 Before the closing ceremony, as usual, annually we will have the Malaysian Blitz Open. The time control of the event is 3 mins + 2 secs increment. Many players registered for the event. Not juz the DATMO and Ambank participants but other interested Malaysian also take part. Azhar's family, Irman Ibrahim.. and etc! 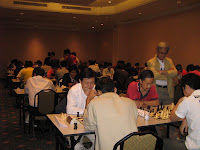 All players will be playing for all 9 rounds swiss system. Top 16 will receives prizes, but top 8 will compete for knock out rounds (quarter finals, Semi and Final round) 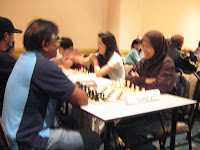 This is me taking part too... It was fun and interesting way to test your skill.. 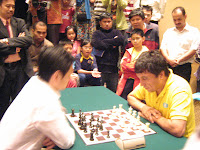 The final between GM Zhang Zhong vs GM Saidali lyuldachev. The final game was conducted after the closing and dinner held at Cititel Ballroom.. Saidali beat Zhang Zhong 2-0 straight. I think the factor of having the game delayed does affect the players' game..
Posted by NWM 019-9699879 at 10:15 AM No comments: