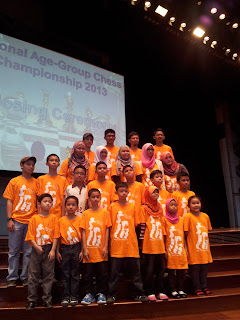 It started off when parents started chit chat among themselves during tournament. Then they asked yours truly is it possible to gather a bunch of 20 kids to join the trip, I said yes!

Then we had our PCDK meetings with parents to discuss further. Sms were sent to many parents and school teachers that have supported PCDK through out the last 2 years. We were all so worried after not many turn out during the meeting. But as usual we wont want to give up (yet)..

To persuade parents to take their kids is not that easy, some did pay and register. And few days later withdraw. When we finally had names that confirmed, more bad news for us. There was this Zon tournament as qualification to play in MSSD Kuantan falls on the same date as NAG! Gosh! We almost thought the trip was impossible. Meetings were held with PPD Kuantan and PT Kuantan discussing the matter. Phew! Alhamdullillah.. The dates wont clash with NAG. And if it is, auto qualify is given to all that join the trip.

After weeks of planning, days of struggling to actually make this trip happening..finally on 31st Jan we depart from Kuantan at 3.30pm to UTP Tronoh Perak for NAG which was scheduled on 1st feb to 3rd feb 2013.

Many thanks to PCDK comittees namely en Asman, Pn Hamidah, en Nordin, en Ayib, to all parents and players! This trip will never happened without the support from all of you. My sincere thank you!

There are so many rumours and bad stuffs about yours truly were talked by so many others. And at one point it almost had me to stop chess and gave up.. But when i asked myself why i am doing this in the first place..The knowledge that i had inside me is not mine to own it..it is a gift from Allah SWT and He is The Almighty that decides when i need to stop. It might be today or tomorrow but i will never know. But one thing for sure, to see all those juniors playing, gave me the strength to go on and on...insyaAllah..