12th July 2009! That's it! the Port Klang Open is on this sunday! It seems that chess fans will be strolling over to play in the competition!

Date : 12/7/2009 (Sunday)
System : Swiss System - 6/7 rounds ( Round 1 starts at 9.30am )
Time Control : 25 minutes per player
Tie Break : SOLKOFF, SONNEBORN BERGER, PROGRESSIVE SCORE
There are cash prizes and souvenirs worth more than RM3000.00. And for me, the best part about En Azhar Said tournament, is that FREE Breakfast for All Participants!! Yeay! what more can use ask for? I am sure players can play well if you consume breakfast you get more energy and more oxigen for your brain!

Until Death Do us Apart..

This is not a chess topic at all, but I think I need to write this, and get this feeling off my chest. What does death mean to anyone of us? Do we cry when someone dear to us pass away? Do we cherish or throw hate at the person during his/her living?

I watched MJ memorial this morning, simply because I was too tired and slept early, thus woke up in the early morning and find myself couldnt sleep anymore. I watched the fans were screaming, the musics were played to honour him, the family and dear friends were all in tears. Honestly I dont like MJ in person, I think he made so many mistakes in his personal desicion making, but I dont blamed him for that entirely, in fact I dont even bother about his personal life. I just enjoyed listening to his music and staring in amazement for his moonwalk dance. And yes, when he is reaching out, voicing out to the rest of the world about, the famime in Africa, the earth issue, the unfortunate children in the world through his songs - in which Heal the World is my fav, he touched me. But no, I dont cried out loud like them. But, hearing his daughter speech out, i fell into tears. In my mind, how is Farhan doing right now?

The passing of my dearest friend, whom not just a friend but more like a younger sister that I have never had, clearly put me into tears. She passed away on 20th June 2009 at the age of 33 years old at Hospital Selayang approximately around 2pm. When I received a call saying that she has gone... I was stunned.. and speechless. My mind had flown to see her at that very moment, trying so hard to pull myself together. I got to see her for the last time at the hospital, she was already ready to be covered in white cloth. I dont dare to kiss her forehead, like the rest of the family, even though her sis did pull my hands towards her. I'd just back-off.. wasnt ready to say goodbye to her. Tears wouldnt stop flowing at that time, no matter how many times I tried to be brave. The sad moment was especially when I saw her son, Farhan carried by her hubby kissing his Mama for the last time.

Cant really imagine the life without hearing her voices again, coz, I have known her and husband for more than 14 years. And all of us met during Intekma 1995 at Dungun. All of us in the team became close like family, Nije (team captain), Sharul, Hairi, Syamsul, Lope, Fazli (her hubby), me, kak Tun and her. During Intekma, we met friends like Maliki, Hashim Jusoh, Irwan Zulkanain, and Shamsul or Sam as he is known in Nusa Mahkota team. During the years also brought me to be friends with Norzamri, Syaiful, Syed Iskandar and few others.

I knew she was diagnosed with so many deceases right after she gave birth to her son 5 years ago. Though I wish the pain had gone away, and may Allah swt make her feel better again, but somehow it never occur to me to had this idea that she will say goodbye so soon.

Simple enough to say, her death made me take a step back and think of so many things that I seldom take note. I always take things for granted, thinking that there will always be a tomorrow for me to be around the people that I love, but I will never know tomorrow could be their time or perhaps it could be my time to leave. I dont want to live with regrets like what I felt today after her passing.

And yes I have been busy updating myself with so many things, putting things according to priorities. And because of that, my sincere apologies to my team PCWM that I have been missing the DATCC Chess League for 3 times now, and I think I'll be missing the games for the entire month of July (I think). I will try to make it once I have completed the things that I needed to do. Chess has always been the game that I fell inlove with, but right now I am taking things one step at a time, coz no matter how busy I am, I have to make sure I still have to time to be with my family.
Posted by NWM 019-9699879 at 11:01 AM No comments: 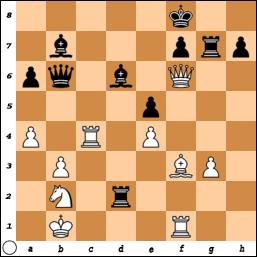 In the position above both side has an equal chances of winning.the question is

a)Find the best continuation that possible for white to play?