Still in chess fever after Malaysian Chess Festival ended in August, I decided to have my buka puasa with my chess friends while enjoying the round 4 games at KL Open 2009. It was held at Shah Village Hotel in Petaling Jaya. Not far from Taman Jaya LRT station, and from Amcorp Mall. Today is the last of the 9 round swiss system. Not many players taking part this year, only about 56 players. Though it was held after Malaysian Open, but not many foreigners stay back to play at KL Open, I guess at the same time too many tourneys is on going. I see improvements in this year KL Open. Last year, the scoresheet is just a photocopy piece of paper, but this year I see the carbonised score sheet is used. I saw Andrew, so, maybe this year we can see the bulletin of the games printed to players. Last year, there were no time increment, but this year the organiser used increment digital clock (and by the way, it is the same as being sold at this site dgt 2010). I am only there for the round 4, and the place is quite small too (coz not many players I guess), so, I cant take many pictures as walking around seems to make the players uneasy. Here are pictures that I managed to snap.. 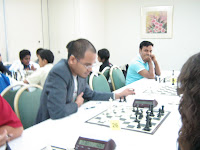 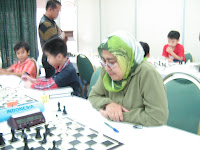 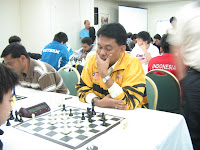 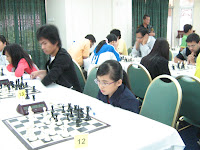 Pic left : Ismail Ahmad (MAS) - 2089. He is with 2.5 points from 8 games. His performance in this tourney is not much like what the rest of us expected... probably, the fatique from recent DATMO does affect ones game.
Pic right : NWM Tan Li Ting (MAS) - unrated. She is with 2.5/8. Not bad! 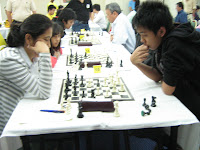 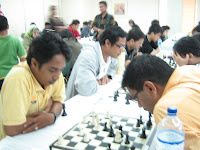 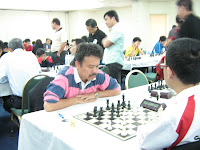 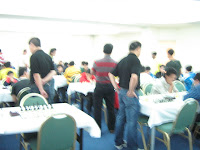 Pic left : Najib Wahab - He is normally known as the arbiter of Malaysian Open.. infact he has been doing that the past 2 - 3 years now. But I was surprised when I saw him play at KL Open! Wonder what on earth struck him to take part? :-)) though he hasnt play for so many years, but he got a good result too! 4/8! Not bad huh for an arbiter turn player.. :-))
pic right : the scenery of KL Open 2009. 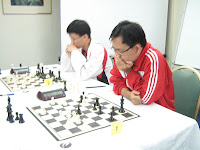 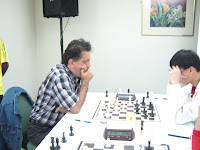 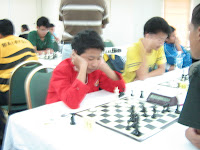 Masruri Rahman (INA) - 1987. He was my opponent at the recent Merdeka Team. Aged 13, but he is a very good player. The next Indonesian GM perhaps?

The final round pairings :


My prediction - the top boards would probably agree for a quick draw, while the rest will fight for the top ten prizes.

Best Malaysian so far is NM Edward Lee (4.5) will play against Ian Udani. Hmm.. this would be interesting! Abd Haq (4) will play against Singaporean Jerome Eng. The arbiter turn player - Najib Wahab (4) is up against Kalugampitya from Sri Lanka. Wong Jianwen (3) vs Biswajit, Ismail Ahmad (2.5) vs Monica (INA), Haslindah (2.5) vs Djoni (INA) - he is the manager of Sekolah Catur Utut Adianto, Tan Li Ting (2.5) vs Chen-I-Chen (TPE).

Hope the last rounds produce better results for the Malaysians!