And we have the new World Chess Champion 2007!! 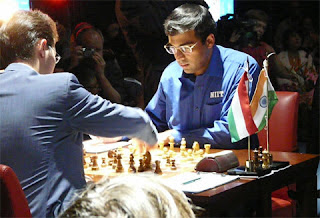 And we have the new World Chess Champion 2007!!
I never guess that Anand will be the truly one. I know that Anand's is exceptionally skillfull and will be the champ, but I would never thought that he will actually pull it through!!
Well done!! and kudos to asia for making a mark in the world chess. Anand is not just the first Asian to do so, but he is also the world no. 1 ranking and the world champ! The last that did that was Kasparov (even Kramnik wasn't in the first ranking by rating, when he was the champ).

I am happy that Anand is the one, he deserves it more than anyone else (besides Kramnik la..).
Because he has it all, the oscar, the world no. 1 spot, etc... but never the one and only unified World Chess Champion... And he did that with style! Being the only player undefeated in the double round robin tournament (Yeah, Kramnik suffered a set back when he lost to Morozevich!).

But at the same time, I feel sad for the Kramnik is not the champ. Coz he sure need to prove something... But then again, things aren't going as we planned it. Kramnik is a strong when it comes to one to one game, but in this double round robin thing... who knows... It is an upset for fans to see him drew in games with just 13 moves of play..