Anand Did It Again!!! 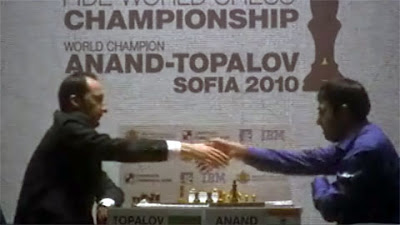 (**picture above taken from chessbase.com)

I am totally sleepy at this moment, but my heart tells me I need to watch the last game (game 12) of the World Chess Championship between Vishwanathan Anand and Vesselin Topalov. And so I did. And yeay! Anand won, and he retains the World title!!!! And he won the last game using Black!

I am rooting for Anand to win the title since I am much fond about his game than Topalov (maybe coz I can understand a little, I mean a little about his chess moves compared to Topalov) and besides his attitude "I am here juz to play chess" to me is a humble statement.

The game has been played since 24th April and juz ended today 11th May 2010 (with a 12 game match, if the game is indecisive after game 12, game 13 in rapid time will be played), after a much controversial one day late start of the event due to the volcano eruption in Iceland that affects Anand's arrival in Sofia, Bulgaria to get on with the match.

And when Anand (as Black) lost to Topalov in the first round, not juz me but the whole of the chess fans was surprise at it! But on game 2, Anand (as white) take charged and won the game. And it is a tie now. But on game 4, Anand make full use of the blunder made by Topalov to secure a win (also using White), and by winning this game, the match is now fun coz all the fans will be watching closely how Topalov gonna break Anand's shield. From game 5 - 7 it was a hard fought drawn (according to Sofia Rule - no mutual draw is accepted, unless the game is actually drawn), it was very interesting when Anand for many times refused for a tripple repetition draw but instead opted to play for a win.

But on game 8 (and I was up watching the online match!) Anand made an endgame blunder and he lost! making the game now a tie for both parties.. After this I have been watching the game 9 to 11 with the hope for Anand to win (too tired to stay up is the main reason), but the hopes fade coz all ended in a draw. Everyone online was talking that game 12 will also ended in a draw at the beginning and force the game into rapid play next, but to me no matter how good Anand can be in rapid, but a GM (no wait! a super-GM) up against another GM is not an easy task.

In game 12, when I saw Anand played 24...Bd3, I said hey, this could be something, as I saw how powerful that Bishop could be later on controlling the diagonal a8-h1 plus the centre from the distance, not to mention the power of Rook controlling the d-file (wow! who would have thought I could read that!), I knew with pressure anyone can make mistake. And with pressure Topalov did make a weak move on move 32.

Though with one Rook and one Knight played against one Queen of Anand, I dont think Anand will let go the winning chances. At move 56, with a reluctant heart (I bet he is in that mood), Topalov resign....

And yeay!!! Hail King Anand! But thanks to both players for making it a worth while for the past weeks to stay up watching the game, trying hard to analyse the moves made by them and getting frustrated too when cant even understand what they are trying to do. Thanks again guys!

This weekend is sure going to be a very exciting weekend indeed! with 3 tournaments held at different places at the same time! 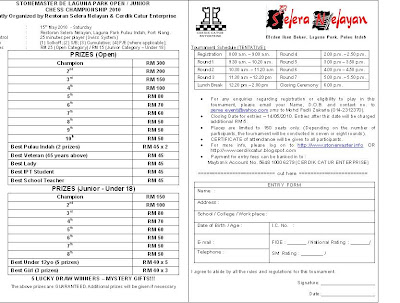 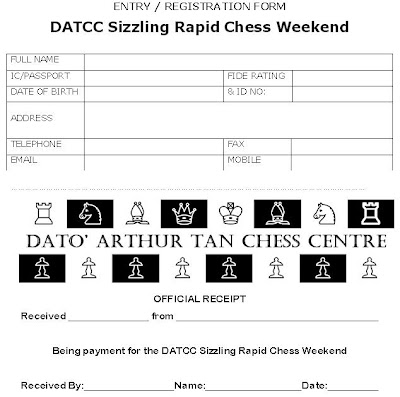 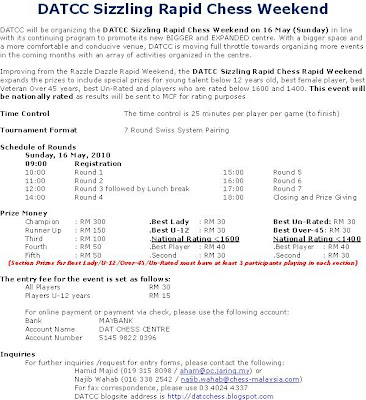 **the same thing happened to this email I received from En Najib Wahab regarding the coming event on the 16th May in DATCC Kompleks Wilayah Kuala Lumpur. My apology also** 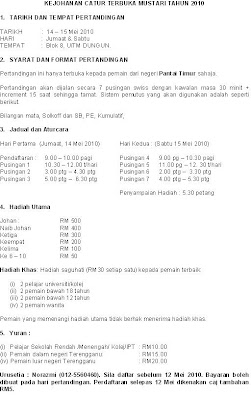 **While browsing and cleaning up my spam box, found this email from En. Muhammad Arshad regarding the this Dungun Open event that was mentioned before by the organiser En. Norazmi Mohd Nor. My apology for not noticed this sooner... **
Posted by NWM 019-9699879 at 10:42 AM No comments: