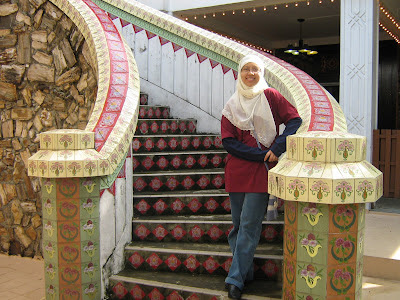 (The pic above is taken at the Malay Village at Singapore, hours before Malaysian Team went back home on 16th dec 2007)

We heard talks about our huge losses on the recent Mas - Sin match 2007, just ended last sunday in Singapore. Why do we lost? Are we that bad in chess? Is it really becoz no rated tourney often held in Malaysia for Juniors? Or becoz we are not that competitive in chess when playing with other countries......

This is what my view is:
We have lots of chess trainer who offers different way of coaching, but lead to the same goal - play the best and win! We may not have the army of chess to wipe off ships of enemies, but we have few talents that can take on the enemy's general at any time! But, can these talents commits to the fact that he / she must contribute to the nation with more success? I notice that we malaysians have problems with dicipline! How many chess players here really study chess constantly? Even the top players in Malaysia, does it on and off. Only really concentrate when the tourney just around the corner.

We have this envy that we want to be the best among ourselves, battling big to be the best locally in local tourney. Correct me if I am wrong, when we play locally, even when we are one pawn down, we never surrender, hoping that our opponent makes blunder. But when we play with opponent from other nations, did we ever think of them making blunder? Instead we resigned at early stage. Why can't we just be ourselves and fight till the end... maybe the position can still be saved? (you know what I mean, not in a position where you are completely have no hope at all!). Can't we have the same attitude playing locally and internationally?

For me it is ok to lose to Singapore, but it is not ok to lose talented players!!! We saw players as young as 5 years old interested in chess, playing without fear, and having fun at the same time, and cry when losing a game of chess. But where do these youngsters stand in few years to come? Will they chart the map in Malaysian scene? Or maybe one day they decide to play another game? Then, what part can we play to encourage and groom these talented kids to be the next GMs?

All of us should take a role to give these kids a chance to shine. Parents should now take the same interest to take their kids to the next level (better coaching), coaches should train them different perspective of the game, and chess players and fans, can help these talents in giving a tip or two on analysing the game to show them what they did wrong...

We used to have names like, Audrey Wong, Seto Wai Ling, Ong Hwa Lu, Geraldine, Nurul Huda, Eliza Hanum, or players like Mohd Kamal Abdullah, Mohd Nor Yahya, Jimmy Liew, etc.... these are the players that no longer took chess competitively, due to family or working commitments..

Now we have Siti Zulaika, syazwani, Anas (to name a few), but how long long will they sit in the map? It will the happiest moments for all to have a new talents taking their places in the chess scene. So, those kids are the future that lies all the hope of all of us!!

Don't let these chess talents be the forgotten names like Rosazman Rosley or Yusjefri Anwar who used to impress the chess fans in Malaysia when they were just 9 years old in the 80s.. 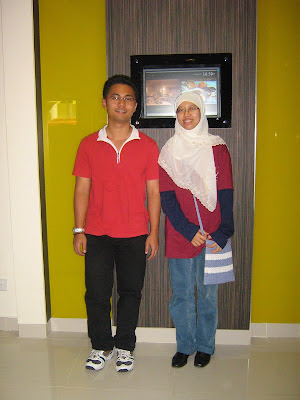 Our best bet to become the first GM, IM Mas Hafizulhilmi... Can he make it to the title by next year? I know he has been really hardworking in realising his dream, and our dreams in becoming a GM! a title that has yet to be ours for years now... Ever since he took his sabatical leave, he has been playing abroad, since Oct 2007 - Macau Asian Indoor Games, then to Australia training with GM Ian Rogers and took part in a small competition there (he is the champ there), then flew to India for the Commenwealth Game, then Mas - Sin Match, and currently playing at Singapore Masters.. We all hope he get his first GM norm there.. He has been battling for the title all alone abroad, without any manager accompanying him, or any coaches watching his game, or any written messages from us Malaysians giving him the moral support for his fight!

A lot of people maybe doesn't realise this, but since Mas has made his journey for the GM title, all chess fans in Malaysia has been watching his game closely and commenting in every step that he take. The joy shared by all when he won against another GM, and the upset feelings also shared by all fans when he lost terribly to lower rated or younger players.. We never realise this, but we are actually supporting him in our own way, together!
Posted by NWM 019-9699879 at 7:51 PM No comments: 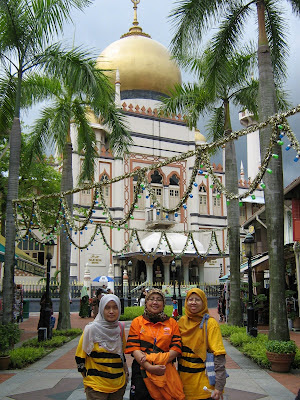 Background - The mosque in Singapore. It was an old mosque left in Singapore.
(pic from left - Roslina, Haslindah and Khairunnisa') 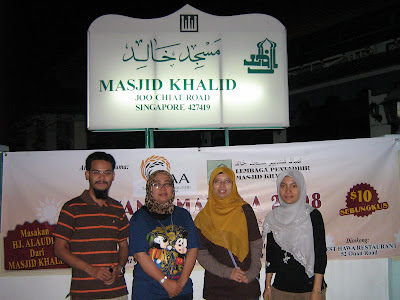 We stop by at one of the mosque near our Hotel during our last night of stay. (what we called "safari night")

One of Halal cuisine in Singapore. (pic from left Samantha Lee and Haslindah) 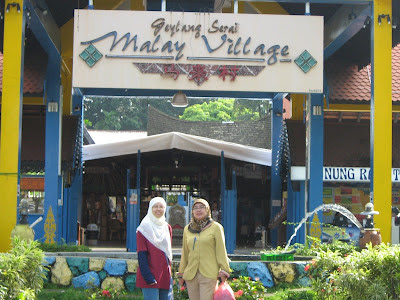 Historical Malay Village in Singapore. Malays there are more appreciative of the malay roots since they are the minority.. 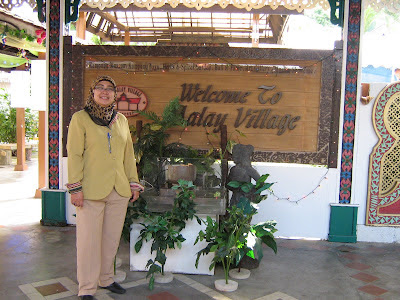 The result of the Match 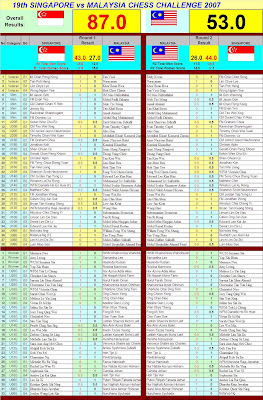 The Malaysia - Singapore match comes to its 19th edition which started on 15th December 2007.
We embarked off on our journey to Singapore on friday morning 14th December via KTM Train. The total of huge numbers are on the list to Singapore this year's match. A total of more than 100 people including parents are in the list!!
It was a success story on our side, managing such a huge squad! I would say kudos to Haslindah Ruslan our team manager for her effort in ensuring that the team were well taken care. Not just that she offered RM50 for those who manage to get a 2 points (perfect score!) and any team that manage to win against singapore (eg : team U-8 boys wins against team U-8 boys Singapore), will get RM200 for a team!!
It was an effort made by haslindah to reward the players to do at their best and at the same time having fun in Singapore! The players this year mostly are new to this environment. It is great to see new youngsters pulling their strength in this event. And the one that scores full point are all the under age kids!!! (amazing huh!), and the best team was won by our U-8 G team!!!
Yeah! we lost... and I admit it was a deep and big lost! I admit too that it shouldn't be that way coz, we have been losing every year to Singapore, ever since their academy existed.. But to be honest... seeing those kids play, the ones that has never played internationally (this is their first) lies all the hope for future chess in Malaysia (giving time that these kids does improves with proper training of course). By giving them the opportunity like this... it is like a dream come true to them and make their parents proud of it. I have never seen parents actually fork up money just to see their kids in action.. And seeing their happy faces..
But, fate has always have its way on every road that we take... It was unpleasant to hear such a harsh voice from Singaporeans... Being so cocky and snobby on the victory. And at the end it wasn't a "friendly match" as the objective of the event anymore.
They are so proud of the victory that they forget what is the beautiful game of chess are all about. Chess was supposed to teach us the value of life, because chess is life (it is larger than life for some people). Like any other sports, chess brought people from all over nations no matter what religion and colour sit together staring at the chess board, and later on talk about chess all days. We have that one thing in common... then why must we destroy it? We are not in war, then why the hatred exists? Are we teaching the right way, the right attitude to the younger generation by mocking your opponents? is this the culture that we want to show to the world? Chess has always been a game and never a sport in some part of countries, is this the example that we want to give them?
I was shocked to hear this... not just me, ask the parents who are so happy to be in Singapore with their children, and suddenly hearing those words... what do they think?
If this year is the last so called "friendly match" then, I am at the least to feel regret... To me I have touch and feel the victories when we first hosted the event. Being the among the first playing the match when it was held years ago.... yes, we win big when it was held years ago, but are we being rude to our neighbour? I can tell you, NO.... as a Malaysian I am proud to say that we are the fair play winner.

View from my room at the Lion City Hotel.

This is another part of Singapore taken from my room..

on 14th dec at 10pm the briefing was held at the Lounge area at the third floor.. you can see the parents and the players listening to every word from the manager.

Haslindah - "we will award the winner with..."

The morning briefing by Haslindah...

Haslindah remind the players again of their duty

Women players - Samantha and Roslina (not pic are Haslindah and Khairunnisa)

U-20 Boys with Zarul Syazwan leading the pack

U-20 G lead by Sukan Wanita Kebangsaan u-20 winners

Mas in the men's team

far behind is Mok with a very young opponent.. 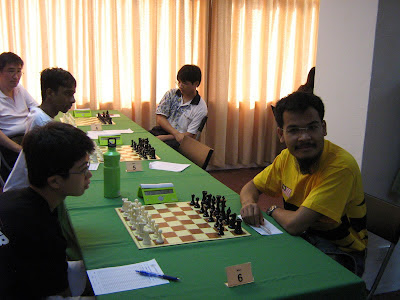 Abd Haq making his comeback into the chess scene..

Edward Lee leading the U-14 team, together with Izz, Syakir, and Nabil

U-18 Boys with Anas on top board 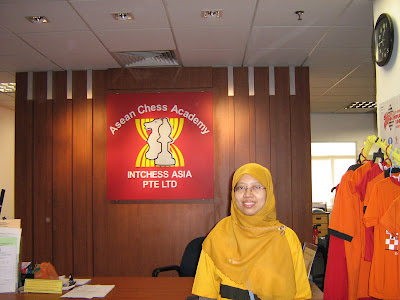