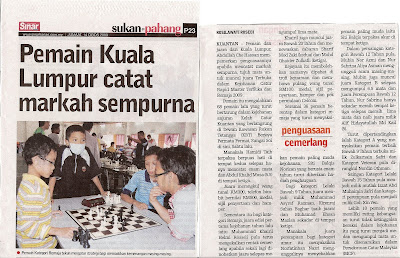 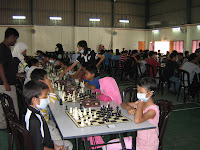 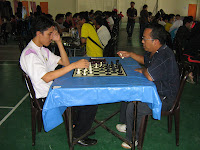 Pic left : Category B in action! Mubin vs Sabrina (both wearing face mask in protection against H1N1)
Pic right : The leader of the Category A, Abdullah Che Hassan vs Fairul Yusof (TRG) 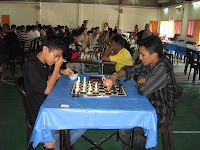 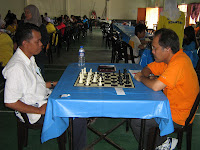 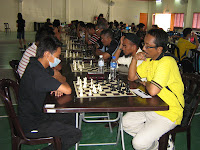 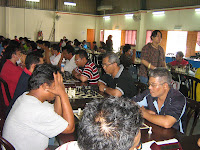 Pic left : on the right you can see Muhammad Arshad (TRG) also taking part, besides him is Suwardi Andri (former Pahang Player in the early 90s)
Pic right : Presiden of Kelab - Kamal Azmi, besides him is Presiden TRG chess - Prof Abd Rahim Ramli, and besides him is Mohd Khair) 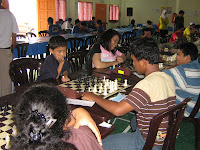 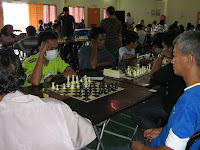 Pic left : The youngest participant in Category A - Zulkarnain Safri from Muadzam (the next National Junior perhaps?)
Pic right : Suwardi Aris Sidek wearing protection against H1N1 vs Azraai Othman
Posted by NWM 019-9699879 at 12:17 PM No comments:

Alhamdulillah! Kelab Catur Kuantan second tourney for this year has ended. Though just before the date of Kuantan Open, Kuantan had its first victim of H1N1 cases, and more schools and higher institution closed, And we finally have the new champion this year. Many people in and outside of Kuantan have come and gather in this tourney, and for that, as a tournament director, what can I say.... but a deepest appreciation from the bottom of my heart! With so many obstacle in running the event before... where we have it almost cancel, and during the first morning of the event, things got a little out of hands in the beginning. But later on, the event went out in accordance to our plan. As a token of that appreciation we put initiative to increase the prize a bit. Not that much, coz this is our first try in welcoming you guys to Kuantan, but there is an increase. Hope in the future we may make it big.

The champion in the open section not just got away with the cash prize of RM300 but also, an electronic Quran Handphone worth RM500. The second prize initially was RM100 cash, we increased to RM150, and so the rest of top 4. we also decided to give away hamper to the number 11th and 12th spot in the open section! And the champion for the Remaja Terbaik also received cash prize of RM100 and with his name carved on the challenge trophy. For category B, we added a little incentive by giving away top 3 placing a hamper, just to honour the achievement of the best top 3. Well, those are the additional prizes given, while the rest remains as what we promised... And not just about the prizes increased, but due to the H1N1 cases, and how we are concern about the safety of this gathering, free face mask is provided to all players and some parents too..

Our motto has been for the benefit of the players, we wish the players can gain something from each and every tourney we organised, that is why we are trying hard improve in many aspect of organising such event. Whatever comments posted in the shoutbox, either good or bad, we take it seriously and aiming our best in making everyone feels worth playing. I am a chess player too, so I know how it feels as a player, as I also know what a player needs. Hope in future we can have it bigger than before.. InsyaAllah..

Category A :
The best U-9 in Open Section - Zulkarnain Safri
The best Veteran - Nordin Othman

Full results is published on chess-result.com Thanks to Muhammad Arshad from caturterengganu.blogspot who did that job!

And once again to all the players, the helpers (Nurul, Nordin, Fadzilah, Uma, Sathiarani, Kumara, Shin Wei, Tasya, plus all the volunteer helpers including en Nordin's children), the AJK's, and the sponsors.. Thank you so much!
Posted by NWM 019-9699879 at 9:15 PM No comments: