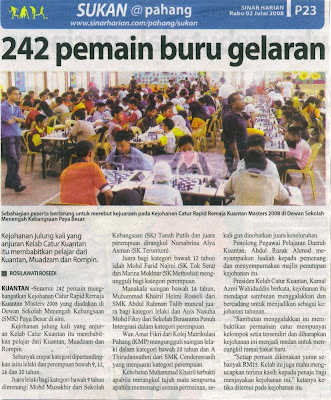 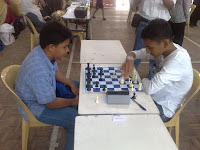 Not just it is the last round, but also the last game to finish! 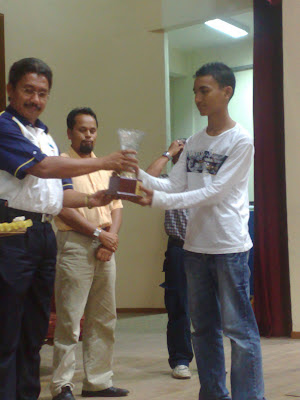 Congrats to all the winners!!!

Here goes the result of the event...

Wow... it was a tiring day for all of us... Well, sunday 29th June 2008 marked a history in Kuantan for all Kuantan chess fans!

A total 242 players turn up for the event, well actually 243 paid and register buat later on sms me that he couldn't participate due to illness on that day..

This was actually officially a second tournament that I organised. The first was Kuantan Master 2007. And this year, again Kuantan Chess Masters Rapid Junior 2008!. But for this year event it was held under Kelab Catur Kuantan.

Kelab Catur Kuantan was formed in February this year, aiming at producing more chess activities in Kuantan, and more talents to arise from it. And to me I am more interested to produce more quality games in the future, so that we too have the equal talent same like other states. That is my pure intention..

Ok, back to the game.. though we are short of volunteers, but we manage to hold the event well. Of course with the big tourney like that, there are hiccups. We apologies to all the players, the parents, the teachers and the audience for the delay of round one, and the mistakes that happened after the final round. Please accept our sincere apology, kindly accept we are "buah cempedak di luar pagar". However we promise to make a better tournaments soon.. and a much better tournaments after that... Because we too are seeking for perfection in each event!

Since this is our first event under Kelab, we decided that Junior event is a perfect event to start with. We are aiming at any juniors in or outside Kuantan to take part! Our special thanks to those coming from outside Kuantan for the event - kids from Rompin, Muadzam Shah, Pekan, Kolej Matrikulasi Pahang jalan Gambang, Lepar Hilir and one player from UPM Bintulu on a holiday in Kuantan. Local players were also appreciated for participating, and for making it a big event too!

The event was organised by Kelab Catur Kuantan in collaboration with SMK Paya Besar, and SK Tok Sera. Our thanks to both schools. The venue was held at SMK Paya Besar. Our deepest appreciation to Pn Hajah Hatijah Gan Abdullah, Pn Asmaiani, Pn Zalina, Pn Rohani, and En Roslan. Without all of them, this would never be a dream come true! Our Appreciation also goes to En Abd Razak from PPD Kuantan for officiated the closing ceremony.

Since we don't have enough sets, we have to separate the event in 2 groups. One group playing for U-20 and below, and the other one group will be competing in the U-9 category. For Group One the prizes will also be given to top five Boys and Girls for U-20, U-16 and U-12. The reason why I wanted to have an open event like this, is that I wanted to see the capabilities of these young talents competing with the olders players. Coz, chess is not just for certain age group of people, chess is for all! genius or not they can still compete and play! And I see the talents of U-12 kids actually standing tall with U-20 boys and there isn;t a huge gap separating them.

The favourites for the U-20 event before the start of the round will be Muhammad Khairil Helmi, Sharif Mohd Zaki, Teh Jay Kie and Rudianto, as to me these are the players that always conquer the local events.. But surprisingly the likes of other undiscover talents really make a mark in this event! Only 2 players survive the upset by the unknown players, they are Muhammad Khairil Helmi, and Sharif Mohd Zaki, and they both battled in the final round. If they drew, the champ will be decided by tie-breaks since both of them had the same score, if Muhammad Khairil Helmi won he will win the title of "KUANTAN MASTER JUNIOR 2008"...
Posted by NWM 019-9699879 at 10:42 AM No comments: